Does Being a Mom = Letting Yourself Go?

I missed my 20th college reunion, having given birth just 6 weeks prior.  I wasn't worried about travelling with a newborn.  I just didn't want to chance a meeting with any old exes, while I was looking puffy, poochy and sleep-deprived. (On the plus side, I was rather buxom). Afterwards, I prevailed upon a friend to dish on all our old classmates.  As he ran the "hot or not" list, I noticed that the former was comprised mostly of his single, childless pals, while the latter was made up of couples with kids.  It wasn't an entirely fair comparison, as my friend is gay, and he and his buddies start with a level of fabulousness lacking in us breeders.  But is it a given that having children will make you look older, fatter and less attractive? 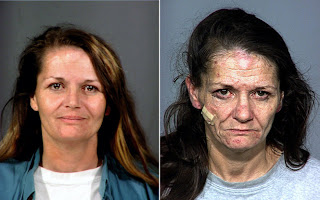 This is what having 2.5 kids does to you.*
Let's start with the easiest question to answer:  Do children make you fat?  In a word, yes.  Numerous studies have shown that mothers have a higher body mass index (BMI) than non-mothers.  Those pregnancy pounds don't just convert into postpartum pounds; they translate into post-post-postpartum pounds.  One study looking at 2,000 women over 65 years of age found that the risk of obesity increased 7% with each live birth.  Polishing off those half-eating chicken nugget meals obviously takes its toll, not to mention the lack of exercise.  Several studies have found that physical inactivity increases with the onset of parenthood.  One study in over 8,000 young women found that when someone becomes a mother, her risk of physical inactivity rises from about 40% to 60%.  Although moms bear the brunt of the weight burden, dads aren't exempt from the curse:  Men also have a 4% increased risk in obesity with each additional child.

What about looking older?  Before my first son was born, I had a grand total of three white hairs; within a year, I was spending 20 minutes a day plucking them.  Nine years later, I've stopped, with the fervent hope that my bald spots will recover.  I couldn't find any studies on whether parenting causes premature greying.  While acute, severe stress can cause diffuse hair loss, there's no evidence that chronic, low-lying stress induces baldness.  What about wrinkles, or other facial signs of aging?

One well-designed study looked at the effect of environmental factors, including parenthood, on perceived age.  Nurses were asked to estimate the age of over 1,800 elderly twins based on facial photographs.  I was relieved to discover that the number of children did not affect perceived age.  Then again, all of these twins were at least 70 years old, so maybe other, stronger environmental factors, such as smoking and sun exposure, obliterated any small effect fecundity might have had on appearance.  (One silver lining, for those of us still working off that baby bump:  thin people in this study looked older than chunky ones.)

A similar study was performed in Shanghai in 250 women, aged 25 to 70 years.  The researchers didn't look specifically at whether the number of children affected one's perceived age, presumably because of China's one-child policy.  However, they did find that having more than 3 members in your household made you look, on average, 2 years older.  Whether this was due to the stress of having that extra, illicit child, or more likely, an aging parent or in-law in the home, wasn't clear, but it might be a good reason to push your kids out of the nest when they turn 18.

Finally, for those of you with babies or young children, don't underestimate the benefit of a good night's sleep.  The research on beauty sleep is scant, but leave it to the Swedes to publish the one controlled study on this topic.  Twenty-three young adults were photographed after 8 hours of normal sleep, and again after a night of only 5 hours of sleep.  The photographs were then rated by observers blinded to the intervention.  Sleep deprivation reduced attractiveness by about 4% and perceived health by about 6%.

Despite the meager evidence, I'm convinced that having kids makes you look frumpier, but the trade-off is worth it.  My advice is simply to put on some make-up, lose the mommy jeans, eat healthier, exercise more, get eight hours of sleep every night....

Oh, forget it.  Just call the plastic surgeon and be done with it already.

*Actually, this photo came from Faces of Meth.  But who's to say she didn't have a baby in the intervening years?
Posted by EBMMommy at 9:45 PM