It's Not Easy Eating Green

A reader sent me a recent article about methods used throughout history to get children to take their medicines.  While the piece focused on sweet talk and sweeteners, the biogeek in me was drawn to a comment about a new compound, GIV3616, that blocks the bitter taste receptors on the tongue.  A scientist from Givaudan Flavors, developer of this chemical, noted that for veggie-phobic children, "We’d like to be able to make their diets more enjoyable by masking the off-putting flavors of bitterness. Blocking these flavors we call off-notes could help consumers eat healthier and more varied diets."  I was dying to get a hold of this bitter blocker to sprinkle on my picky daughter's kale, but that would probably alienate those of you who eschew genetically modified, irradiated, non-organic, non-sustainable, non-locally produced Frankenfoods.  Besides, when I did a Google Scholar search on this compound, nothing has been published -- not even animal safety studies.  (I'm sure it's proprietary.)

It turns out there's a cheaper, low tech solution to increasing vegetable consumption in kids.  This week in JAMA, a psychologist, an economist, a marketing professor and two nutritionists walk into a bar published a study in which they placed photographs of vegetables in elementary school lunch tray compartments.  They measured vegetable consumption on a day when the trays had the photographs and compared it to a day when they didn't have the photographs.  These valiant researchers (or more likely, their undergraduate assistant in charge of "data acquisition") went so far as to scrape off and weigh uneaten vegetables left on the trays, tables and floors. 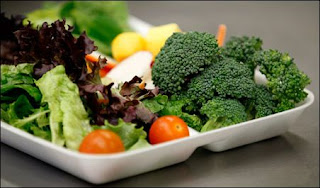 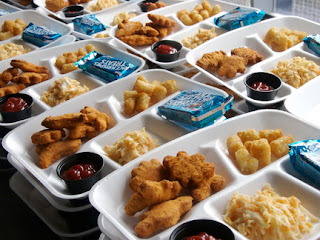 ...or this?
So what did they find?  On the positive side, the percentage of children scooping green beans and carrots into those compartments went up from 6-12% to 15-37%, and overall consumption increased modestly.  On the downside, a lot of the kids left their veggies uneaten (in fact, more carrots were wasted in the photograph group), and even with the overall increase, consumption still did not meet government recommendations.  The study was also performed over a mere two days.  Kids will figure out in no time that no one's going to punish them if they scoop pudding into a green bean compartment.

As for me, I'll keep waiting for that magic bullet.  To the marketing geniuses at Givaudan:  hurry up, rechristen your license-plate chemical "Flavia," and release it to the general public. And  one more favor, if you please: Publish a study showing your bitter blocker won't make my daughter grow a third eyeball.*

*What's more likely is that she would grow more bitter taste receptors in response to chronic blockade.  (That's the mechanism by which people become tolerant to narcotics or alcohol).  If she were to suddenly stop using the chemical, she would be more sensitive to bitterness than ever before.
Posted by EBMMommy at 5:44 PM

Email ThisBlogThis!Share to TwitterShare to FacebookShare to Pinterest
Labels: Nutrition