When the Zebra is a Horse 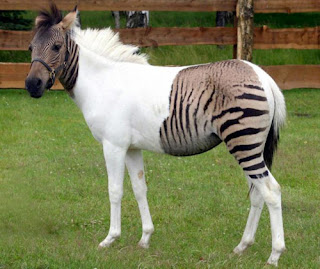 Is this a zebra, a horse, or a Photoshop disaster?*
Here's a trivia question for the doctor-folks who follow my blog:  What's the most common cause of encephalitis of uncertain etiology in children and young adults?  Hint: It's not herpes, rabies or even West Nile.

If you already know what I'm talking about, I'm impressed.  I had never heard of this entity until today, when our chair forwarded everyone in the medicine department a report from the California Encephalitis Project (CEP).  In fact, anti-NMDAR wasn't even discovered until 2007.

Encephalitis is inflammation of the brain, resulting in fever, confusion, seizures and sometimes permanent neurologic damage and death.  It's usually caused by viruses and sometimes bacteria, when it accompanies meningitis.  Anti-NMDAR is not an infection, however.  NMDA is a ubiquitous neurotransmitter, and in this disease, the body produces antibodies that attack the NMDA receptor, leading to gross neurological dysfunction.

Anti-NMDAR can be a devastating illness.  It presents with hallucinations, language problems and vital sign instability, among other signs and symptoms.  In the CEP report, 40% of patients required life support for respiratory failure.  Fortunately, there is effective treatment for anti-NMDAR.  The majority respond to a potent cocktail of immune suppression -- the exact opposite of how you would normally treat infectious encephalitis.

And here's the surprising part of the report:  Out of 761 cases of encephalitis reported over the 3 to 4 year period, 47 were tested for NMDAR because of clinical suspicion.  Thirty-two, or 68%, tested positive.  In fact, even though only a fraction of cases were tested for anti-NMDAR, it was the most common cause of encephalitis in this case series.  Two-thirds of cases were in children.

Now encephalitis is still a very rare illness, with an incidence rate of 1 out of 200,000 in the U.S., so even if anti-NMDAR is a common cause of encephalitis, it's still an extremely uncommon disease.  (Please do not charge into your pediatrician's office demanding to have little Johnny tested because he has a fever or is moodier than usual.)  The CEP only collected cases of encephalitis of unknown etiology, so many of the diagnosed viral cases were excluded from this analysis, artificially inflating the relative frequency of anti-NMDAR.  On the other hand, because so few doctors are aware of this disease, we are probably undertesting and missing cases.

In medicine, we have a saying:  When you hear hoofbeats, think of horses, not zebras.  In other words, don't go on an expensive hunt for a rare disease unless you have a compelling reason to do so.  When it comes to childhood encephalitis, though, anti-NMDAR may turn out to be the proverbial horse.